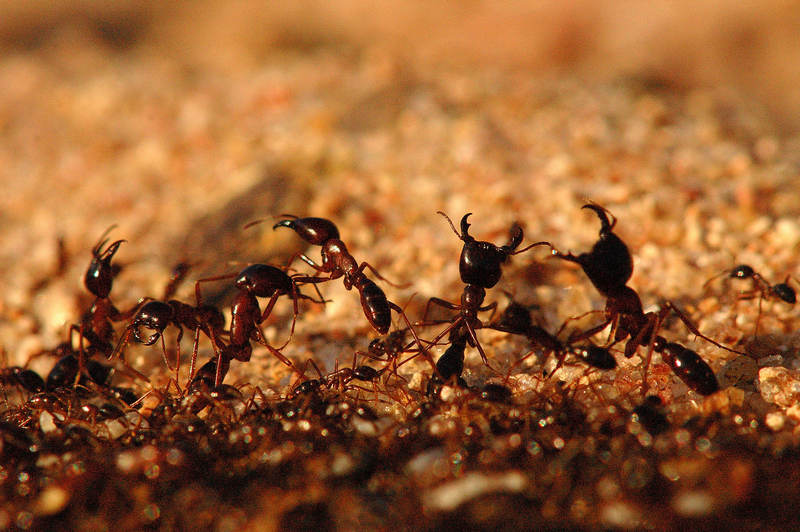 During times of drought army ants, native to eastern and central Africa can form columns 50 million strong and strike off across the countryside in search of food, eating virtually everything in their path.

Imagine being attacked by a living raft of ants that can put you in the hospital, or even kill you.

Fire ants are an invasive species, initially brought to the U.S. from South America in the 1930s. Since then they have spread north to much of the southeastern United States. And this time of year they are mating, a ritual done in mid-air. During floods, entire fire ant colonies can huddle together to form rafts that stay afloat for weeks.

In August of 2008, a man walking his dog after flooding rains in Chuluota, in eastern Florida encountered a colony of fire ants. He was swarmed and immediately went into anaphylactic shock. At the hospital the man was pronounced dead.

Other Great Reads: The complete guide to planning a funeral

In June 2006, Janet Shiansky, a 68-year-old South Carolina woman, went into anaphylactic shock and died after being attacked by fire ants while she was gardening, according to ABC News. Several ants ran up her sneaker and stung her foot. Her husband brushed them off and treated the stings with ammonia. When he went back to check on her a few minutes later he found her lying unconscious in bed with her sunglasses still on. At the hospital, doctors found that her brain had begun to swell. She died the next day.

Fire ants have something of a cousin in Australia’s jack jumper ant, which is most common in southeastern Australia and Tasmania, where it kills more people annually than spiders, snakes, wasps and sharks combined. The ants can be an inch long, are red and black with yellow and orange legs and when disturbed will jump, hence their name. Jack jumper ant nests are often hidden under rocks. They don’t bite but sting their victims with venom, similar to a wasp or bee. The reaction is akin to that of the fire ant, localized swelling and reddening develops, followed by white pustules and blistering. For those who are allergic the airways may close, resulting in death.

Other Great Reads: Death from above: killed by falling coconuts, meteorites, hail and frozen airplane shit

But the most fearsome ant of all is surely siafu, or the African safari ant, also known as the army ant. These ants are native to central and east Africa and form colonies with as many as 20 million individuals. The ants are most dangerous to humans during times of drought. They will form columns 50 million strong and strike off across the countryside in search of food. The columns are easily avoided, as they go at a pace of about 60 feet an hour. The columns are defended by a special soldier class of ants. They have gigantic heads with large pincer-like mandibles with incredible shearing capacity. The bite is very painful, and because their jaws are so strong removal is difficult. Even if the ant is pulled apart into two pieces the head will retain its hold. Though the ants typically feed on earthworms, large columns can kill small mammals and eat their flesh.

For those things unable to move, like say a home, the result can be devastating, or incredibly helpful, as the ants will literally eat everything edible in their path.

“When they reached a home, they would enter and swarm all over the inside of the house,” explained one Texas blogger, who spent more than 10 years living in east Africa. “They would eat everything in sight that moved. They ate very little of our regular food, but they would eat all mice, scorpions, spiders, etc. They would kill and eat dogs and cats if they were trapped in the house also.”

Interestingly, the Maasai people actually rely on the ants to rid their fields and homes of pests. Families living in dwellings in the way of advancing ant columns will simply vacate their home for several days. Missionaries living in Africa used to do the same thing. “They would be done and move on in as little as two days,” explained the Texas blogger, “and when the missionaries moved back in, the house would be free of varmints for a long time.”

Other indigenous groups in east Africa use the amazing bite capabilities of solider ants to stitch wounds, by allowing the ants to bite each side of the gash, creating a natural form of stitches.

3 thoughts on “Death by Ants, from Africa and Australia to Florida”